Taking Stock of Scenarios with Negative Emission Technologies and Practices 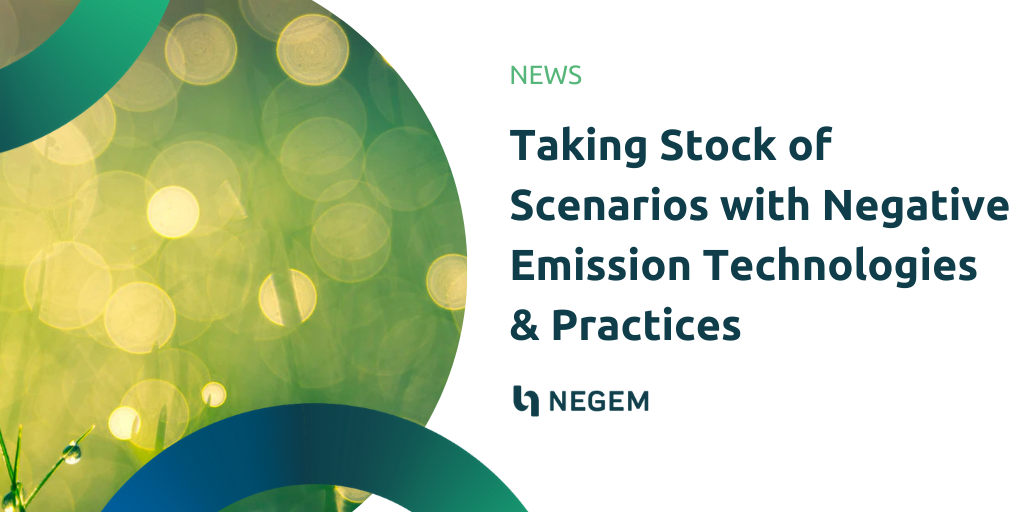 Negative emission technologies and practices (NETPs) have a significant role in the IPCC 1.5°C and 2°C climate change mitigation scenarios, but what is the realistic potential for NETPs when taking into account environmental, social and political constrains? One of the primary objectives NEGEM is to create a clear and shared medium-to-long-term vision of the sustainable potentials of the NETPs, and their role in the greenhouse gas (GHG) mitigation at the European Union (EU) level and globally.

The NEGEM vision making process started with a literature review on the role of NETPs in climate change mitigation scenarios, and with a vision workshop and questionnaire to include the stakeholders’ viewpoints.

The results of this process are described in detail in the report Stocktaking of scenarios with negative emission technologies and practices, prepared by VTT Finland and published in January 2021. The document reviews the role of NETPs in mitigation scenarios in both in scientific literature (especially based on the IAMC 1.5°C Scenarios Database) and in selected scenarios published in the “grey literature” by the European Commission, International organisations, research institutes, stakeholders, NGOs and governments.

Based on the scenarios presented in scientific literature, NETPs are needed to reach the 1.5 °C mitigation goal. However, in the grey literature also quite careful estimations on the potential of NETPs are presented. Especially, the country level long-term climate strategies (until 2050) mostly have vague plans related to NETPs, showing clearly a gap in the potential NETPs demand for mitigation, and the actual level of action.

The 1st NEGEM vision workshop held in December 2020 was an opportunity for interactions with stakeholders and highlighted  different positions on the role  NETPs. They can be seen as a complementary measure to emission reductions, giving a high priority to concerns of NETPs replacing the emission reduction efforts. On the other hand, if the urgency of climate change mitigation is highlighted, fast deployment of NETPs can be considered justified.

In addition, NETPs can be seen as a tool to raise the ambition of climate change mitigation. Based on the results of the 1st vision workshop held in December 2020, barriers for the implementation of NETPs are e.g. the economic performance and a lack of a common EU policy framework.

The workshop helped to include the stakeholder views into the NEGEM Vision work. Three different roles for NETPs were identified, reflecting different emphasis:

2)     If the urgency of climate change mitigation is highlighted, fast employment of NETPs can be considered justified.

3)     NETPs can be seen as a tool to raise the ambition of climate change mitigation.

The initial NEGEM vision will guide the work carried out by NEGEM, taking into account the views and suggestions of the wider audience. The preliminary vision is summarized by the three points below:

PrevPreviousNegative Emissions Technologies and Practices- Building a Vision Towards Climate Neutrality
NextAssessing the Sustainable Deployment Potential of NETPsNext
XWe use cookies on our website to give you the most relevant experience by remembering your preferences and repeat visits. By clicking “Accept”, you consent to the use of ALL the cookies. In case of sale of your personal information, you may opt out by using the link Do not sell my personal information. Read MoreRejectAcceptCookie settings
Manage cookie consent