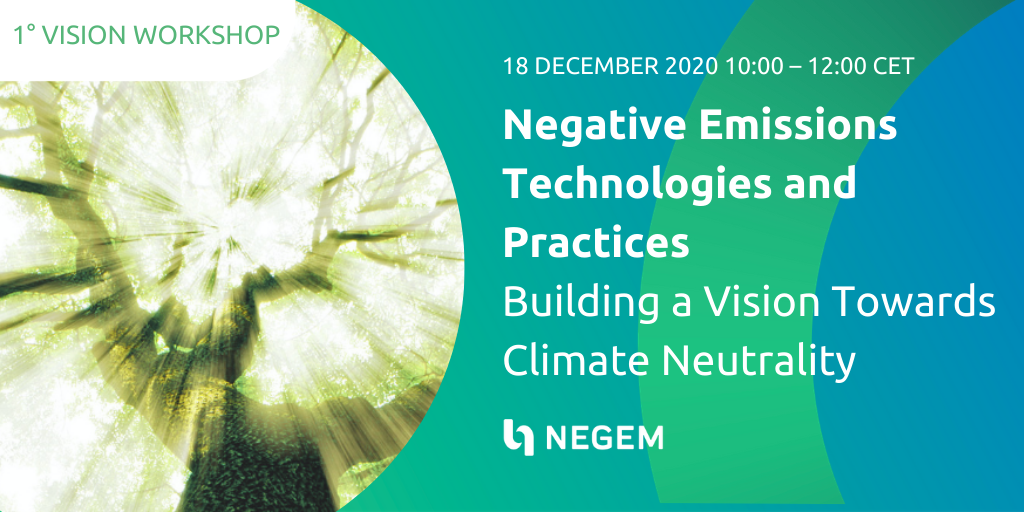 The event was the first of a series of co-creation workshops to set the ground for developing a clear, shared, medium-to-long term vision on NETPs, with a focus on their sustainable potentials and on their role in contributing to the climate targets at EU and global levels. The workshop was organised by VTT in collaboration with ETA Florence and gathered about 80 participants.

In the opening part, Kati Koponen, senior scientist at VTT and NEGEM coordinator, introduced the background and the structure of the project. The opening message was provided by Timo Ritonummi, Deputy Director General, Energy Department, Ministry of Economic Affairs and Employment of Finland and representative of the External Advisory Board of NEGEM. He remarked that negative emissions technologies are foreseen by most climate scenarios and policies as a necessary tool in the future, to supplement emissions reduction in reaching  climate neutrality, and the challenge of achieving cost reductions to scale up NETPs and increase their availability.

Selene Cobo Gutiérrez, Post-Doctoral Researcher at ETH Zürich, highlighted the importance of assessing and quantifying the sustainability of NETPs in order to plan their deployment. As part of her work in the project, the deployment potential of each NETP was estimated by combining technology readiness levels, CO2 removal capacity and costs. Even side-effects were considered for building a final ranking of NETPs. Key performance indicators (KPI) for assessing NETPs sustainability were developed and classified according to different aspects of sustainability – technical, environmental, economic and social. Final emphasis was put on the constraining role of some sustainability issues on the deployment potential of NETPs.

Tiina Koljonen, Research Team Leader at VTT, explored the demand estimation of NETPs throughout literature, then commented the results of the background questionnaire whereby workshop’s participants had been engaged prior to the session.

The literature review, based on peer review articles and grey literature, highlighted some consistent differences across sources and scenarios in assessing NETPs exploitation level; a high level of uncertainty concerning both future emissions level and NETPs performances has a main role in determining such divergencies in modelling.

The results of the background questionnaire showed different levels of awareness and expectations on different NETPs. Most of the participants’ expertise refers to BECCS, followed by afforestation and soil carbonation, while ocean alkalinization seems be to the less familiar. Regarding expectations on NETPs impact for achieving climate neutrality, most of the replies went to BECCS, with no relevant differences between European and global context and between short and long term.

David Reiner, Assistant Director of Energy Policy Research Group in Judge Business School (University of Cambridge) provided an insight into the debate on the role of CDR in the European Climate Law, the core of the new European Green Deal. Considering the concern on its economic sustainability, Reiner stressed on the urgency for creating an evidence base for sustainable CDR, as a way to incentivise learning on NETPs and so proceed successfully on the pathway to carbon neutrality.

In order to make the workshop more interactive and to collect stakeholders’ views, participants were involved in a short survey during the session. Four questions addressed some of the most crucial issues to define the NEGEM vision about NETPs. According to top preferences, the following statements were outlined:

A final open discussion was set on some proposals for a structured definition of NETPs role: not only as a complementary measure for GHG reductions, they can also be seen as a tool to raise the ambition of climate mitigation. Some considerations were done about NETPs deployment, such as the necessity of a good policy framework, the opportunity of introducing taxes and the issue of NETPs acceptability.

Introduction to NEGEM Vision: The Demands of NETPs Based on Literature and Results of Questionnaire, Tiina Koljonen, Research Team Leader, VTT

Watch the video of the webinar here

PrevPreviousOn the Way to Climate Neutrality – Workshop Presentations Now Available
NextTaking Stock of Scenarios with Negative Emission Technologies and PracticesNext
XWe use cookies on our website to give you the most relevant experience by remembering your preferences and repeat visits. By clicking “Accept”, you consent to the use of ALL the cookies. In case of sale of your personal information, you may opt out by using the link Do not sell my personal information. Read MoreRejectAcceptCookie settings
Manage cookie consent