On the Way to Climate Neutrality – Workshop Presentations Now Available 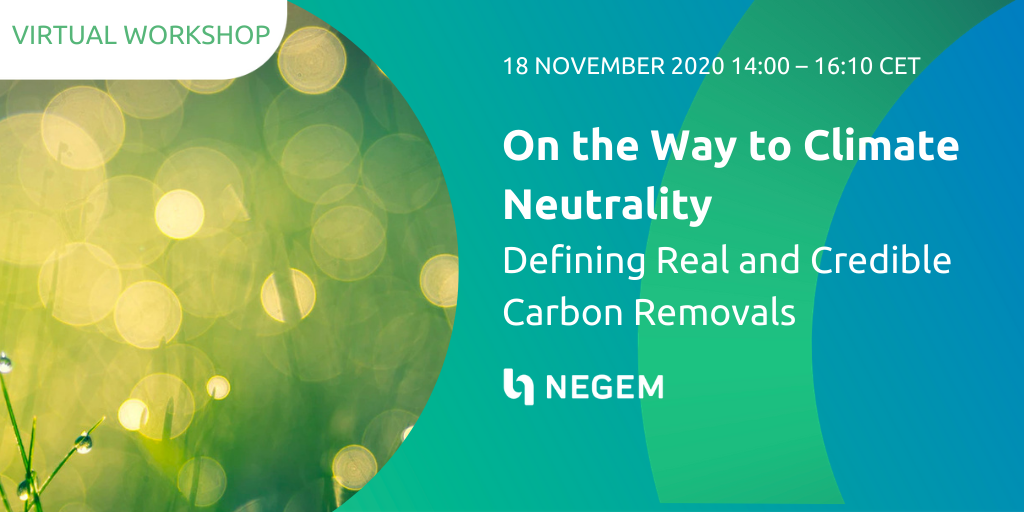 On the 18th of November 2020, in the framework of NEGEM project, Bellona Europa and Carbon Market Watch hosted a virtual workshop entitled “On the Way to Climate Neutrality – Defining Real and Credible Carbon Removals. ”The workshop aimed at highlighting four proposed principles to define Carbon Dioxide Removal (CDR) and at analysing how these would be applied in practice.

The four proposed principles are:

Keith Whiriskey, Bellona Europa, opened the event by outlining the aims of NEGEM project and introducing the above principles as the foundation to define carbon dioxide removal.

Terhi Lehtonen, Finland’s State Secretary for Environment, highlighted the urgent need to reduce greenhouse gas emissions coupled with significant carbon dioxide removals over the course of the century. She emphasised the risks of getting CDR policy wrong: “Counting on removals that failed to materialize or are easily reversible could undermine climate efforts by channeling funds to fake removals, inevitably diverting resources from emission reductions, or by undermining public confidence in climate policy.”

After the opening remarks, the workshop featured 3 different panels where each principle was discussed in order to showcase practices and technologies which can combine to provide negative emissions.

Panel 1 discussed existing methods of removing CO2 from the atmosphere, through technological and natural means, and their respective challenges.

Christoph Beuttler, Climeworks, showcased their Direct-Air-Capture technology, which filters ambient air to capture CO2, using electricity and heat. Lorie Hamelin, INSA Toulouse, part of the NEGEM Consortium, highlighted the need to consider the future impacts of CDR in order to make correct investment decisions today and ended her speech by stressing that with rising climate impacts, maintaining current soil carbon stocks will be challenging and that mitigation will be necessary to safeguard this. Heidi Sorensen, Head of Oslo’s Climate Agency, outlined the role of Klemetsrud, a local Waste-to-Energy facility, in the city’s climate and waste management plans. In her presentation she also stressed the crucial role of the European Commission in establishing a worldwide accounting framework for negative emissions. She also underlined the need for robust regulatory and economic measures stimulating both CCS and solutions for negative emissions.

Panel 2 discussed how captured carbon dioxide can be stored indefinitely in geological formations and in land sinks. Graeme Sweeney, Chair of the Zero Emission Platform, discussed the issue of geological storage by emphasising the importance of a storage target and of the deployment of transport and storage infrastructure. Kelsey Perlman, Forest and Climate Campaigner at FERN, highlighted the multi-faceted role of forests, that they have other intrinsic values beyond their role in the carbon cycle and that their value should not be determined by other sector’s needs to decarbonise.

Panel 3 was focused on identifying the difference between natural and technological removals and the complexities of performing Life Cycle Analyses which accurately reflect real-life impacts on the climate. Peter Zapfel, Head of Unit at DG Clima, reminded of the Commission’s plans for a Certification Mechanism for Carbon Removals to be proposed by 2023. He underlined the need to build a common and transparent certification system for carbon removal across the EU and the importance of limiting administrative burden and transaction costs so that monitoring does not become a deterring factor. Andrea Ramírez, TU Delft, started by highlighting the lack of terminology and confusion in the academic literature, despite the fact that the principles for CDR are straightforward.

Wijnand Stoefs, Policy Officer at Carbon Market Watch, closed the event, stating that all 4 principles would need to be verifiable and well-understood before EU policy can include or support CDR.

PrevPreviousWorkshop: On the Way to Climate Neutrality – Defining Real and Credible Carbon Removals
NextNegative Emissions Technologies and Practices- Building a Vision Towards Climate NeutralityNext
XWe use cookies on our website to give you the most relevant experience by remembering your preferences and repeat visits. By clicking “Accept”, you consent to the use of ALL the cookies. In case of sale of your personal information, you may opt out by using the link Do not sell my personal information. Read MoreRejectAcceptCookie settings
Manage cookie consent