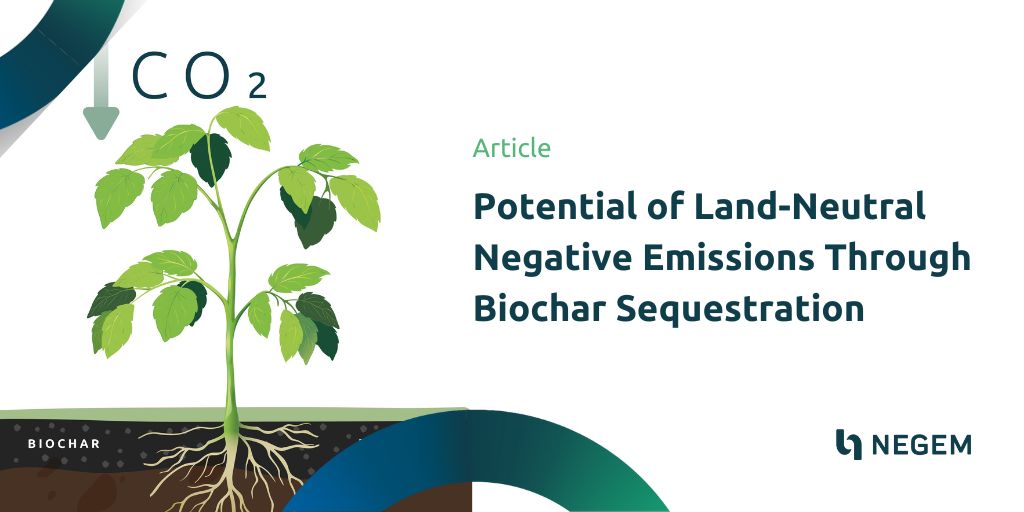 A land- and calorie-neutral approach to achieve negative emissions, based on biomass pyrogenic carbon capture and storage (PyCCS), may effectively contribute to removing significant amounts of carbon from the atmosphere, whilst limiting the estimated pressure on land use of other biomass-based CDR technologies such as BECSS, and freeing up land for additional food production or conservation measures.

⏬ Negative emission technologies play a central role in scenarios to achieve climate neutrality by mid-century as required by the Paris Agreement, however the corresponding scenarios of land and resource use often involve severe pressures on the environment.

🌱Biomass-based negative emission technologies such as bioenergy with carbon capture and storage (BECCS) require vast areas of land in order to meet the targets projected by climate economic optimization models.

📃 This study by NEGEM partners Constanze Werner, Wolfgang Lucht and Dieter Gerten, Potsdam Institute for Climate Impact Research, Germany, assessed the carbon dioxide removal potential of deploying a pyrogenic carbon capture and storage (PyCCS) model, based on land-neutral biomass production with the use of biochar to obtain yield increases in (sub)tropical croplands, to maintain calorie (food) production, while realizing net CO2 extraction from the atmosphere.

🔻 The approach relies on the process of biomass pyrolysis, where biomass carbon is transferred into the more stable biochar that can be used as soil amendment enhancing the soil properties and storing carbon in the soil.

🌾 Assuming the use of biochar in subtropical cropland could lead to an increase of crop yields between 15% and 30%, process-based simulations of biomass growth with a biosphere model indicate that a land- and calorie-neutral PyCCS approach could sequester 0.44–2.62 Gt CO2 per year. This range considers a median yield response to biochar at the lower end, whilst the upper end represents an optimized scenario.

📉 Cumulatively, 33 to 201 Gt CO2 could be removed from the atmosphere by 2100, representing respectively 6%–35% of the CDR required for trajectories likely to limit climate warming to 2°C or lower, in line with the targets of the Paris Agreement.

🌳 Assuming that this approach could free up land otherwise dedicated to biomass plantations for BECSS as foreseen in some Integrated Assessment Models, the researchers evaluated also alternative uses of this land, showing a potential increase of calorie production of 2%–16%, or an additional area of up to ∼100 Mha that could be available for nature protection and conservation.

PrevPreviousCO2 Removal and 1.5 °C: What, When, Where, and How?
NextA Review of Commercialisation Mechanisms for Carbon Dioxide RemovalNext
XWe use cookies on our website to give you the most relevant experience by remembering your preferences and repeat visits. By clicking “Accept”, you consent to the use of ALL the cookies. In case of sale of your personal information, you may opt out by using the link Do not sell my personal information. Read MoreRejectAcceptCookie settings
Manage cookie consent