Limiting the global average warming to well below 1.5°C will require the deployment of a mix of NETPs, and technologies such as direct air carbon capture and storage (DACCS) and enhanced weathering (EW) are often appraised on their ability to remove CO2, however, the overall environmental implications of deploying these types of NETPs at scale have not been studied thoroughly in the academic literature yet. The first publicly available life cycle assessment (LCA) on terrestrial enhanced weathering was published only in 2019, and it highlights potential impacts of EW on acidification, ecotoxicity, human toxicity. This research gap needs to be addressed to avoid environmental burden shifting, and more research needs to be undertaken to establish the environmental risks and potential co-benefits associated with upscaling this technology and other NETPs.

In this context and as part of NEGEM activities, researchers from ETH Zurich and Imperial College of London carried out full-scale life cycle assessment of the environmental performance of DACCS and EW considering their direct impacts, alongside impacts from their supply chains.

The following scenarios were considered:

High carbon removal efficiency for EW but more investigations on health impacts are needed
The assessment highlighted the potential for enhanced weathering processes to achieve high CDR efficiencies at relatively low costs. Scenarios using basalt and dunite show efficiencies of 85% and 96%, respectively. The CDR efficiency of basalt rock is lower than dunite as a smaller particle size distribution is needed together with greater quantities of rock, increasing energy requirements, and the corresponding carbon footprint.

Minimising road transport emissions could help to improve the CDR efficiency of this technology. However additional research is needed before supportive policy measures are introduced to scale-up enhanced weathering, particularly to assess the potential toxic effects of the use of basalt rocks. Previous studies considered the use of basic rocks and excluded ultrabasic rocks in CDR assessments on account of their carcinogenic toxic effects, owing to the release of nickel and chromium into the soil. Although the use of basalt can reduce the carcinogenic toxicity and freshwater ecotoxicity impacts of the EW by 83 and 22% respectively, it can still lead to non-carcinogenic toxicity impacts that are one order of magnitude greater than those associated with dunite, because of the higher content of certain metals, chiefly lead, zinc, cadmium, and arsenic in basalt rocks.
Future research should explore the effect of the regional variations in the weathering rates for the EW processes to tailor the results to the specific regions of use.

Clean energy is the key to maximize the sustainability of DACCS

Direct Air Carbon Capture and Sequestration shows a wider range of CDR efficiency than EW (11 – 93%), this is strongly related to energy source used in the process. HTLS-DACCS scenarios outperform LTSS-DACCS owing to their lower energy demand. DACCS using electricity from the global electricity mix expected in 2030, where fossil fuels account for 44% of the produced electricity, generates the lowest results. In particular, HTLS-DACCS powered by the 2030 electricity mix avoids 807 kg CO2-eq/tonne CO2 compared to only 53 kg CO2-eq/tonne CO2 using the LTSS-DACCS scenario. The use of electricity with a very low carbon footprint, such as that of wind power, can improve the performance of HTLS- and LTSS-DACCS up to CDR efficiency of 94% and 92%. 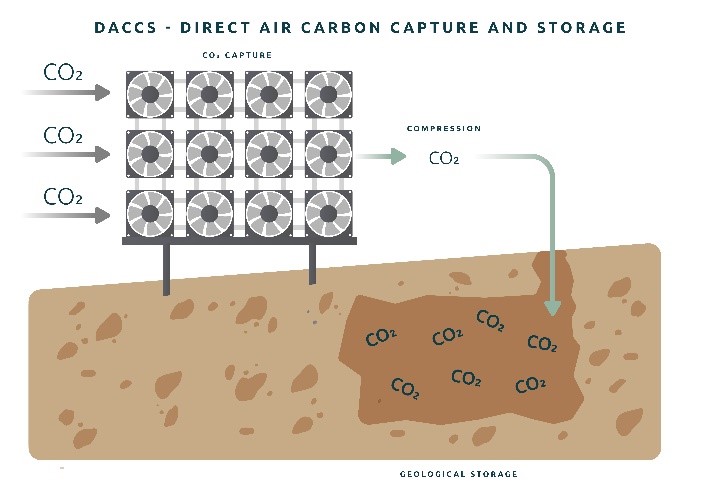 Since in the DACCS scenarios most of the damaging health effects occur because of the formation of fine particulate matter associated with the energy sources, the use of clean energy also minimizes this risk by reducing ozone depletion, ionizing radiation, particulate matter, and non-carcinogenic toxicity impacts. The main side-effects of the HTLS-DACCS scenarios are their large consumption of water to produce calcium hydroxide as a reaction intermediate.

Although this study did not consider economic aspects, further NEGEM work will evaluate the cost of CDR, accounting for the externality costs associated with each CDR technology.

As part of their activities in NEGEM; researchers at the Imperial College of London are developing a software tool to generate member state-specific pathways for

Stakeholder views on the business case for NETPs

The development and scalability of negative emission technologies and practices (NETPs) are dependent on the engagement of different stakeholders. Actors in the private sector and

Stocktaking of scenarios with negative emission technologies and practices: Documentation of the vision making process and initial NEGEM vision

Conservation of forests and reduced deforestation are the best forest based NETPs in the context of the Nordic countries in terms of overall positive impacts.

PrevPreviousStakeholder views on the business case for NETPs
NextA software tool to generate Negative Emissions deployment pathwaysNext
XWe use cookies on our website to give you the most relevant experience by remembering your preferences and repeat visits. By clicking “Accept”, you consent to the use of ALL the cookies. In case of sale of your personal information, you may opt out by using the link Do not sell my personal information. Read MoreRejectAcceptCookie settings
Manage cookie consent