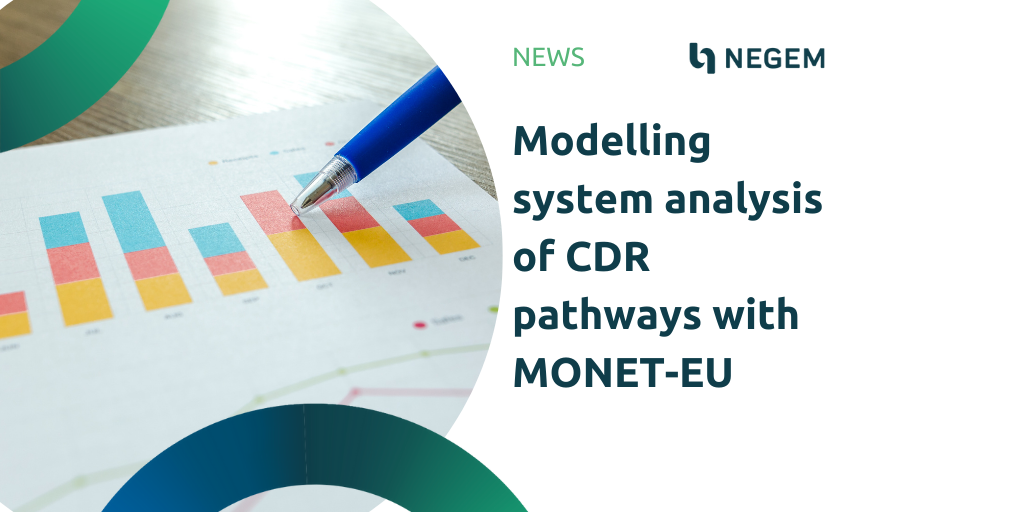 MONET-EU is a spatio-temporal explicit model providing a whole-system analysis of a least cost portfolio of CDR pathways, in a ten-yearly time-steps, subject to a range of sustainability and biogeophysical constraints.

Specifically, CDR targets are specified at country or at regional level (EU), and sustainability limits — land and biomass supply availability, maximum water stress— are imposed in the model, in addition to maximum deployment constraints for each CDR option.

In its initial formulation, MONET-EU included exclusively BECCS within its technological database but as part of NEGEM activities, researchers at the Imperial College of London are working to extend the model database to include other NETPs, specifically afforestation/reforestation (AR), solid and liquid sorbent Direct Air CO2 Capture and Storage (DACCS) systems and biochar production via slow pyrolysis.

In addition, the default input data for biomass yields based on statistical databases were replaced by climate- and scenario-specific yields simulated by the process-based biosphere model LPJmL (Lund-Potsdam-Jena managed land).  This allowed to explore further the impacts of climate change on the yields of the feedstock for biomass based NETPs which were previously not considered in MONET.

In order to validate the model and to investigate the contribution of these NETPs in reaching regional and country level CDR targets with the European Union, the MONET-EU framework was applied to a range of policy scenarios, characterized by a varying degree of collaborations between EU states, assuming that EU countries would either meet their national CDR target in isolation, or that each country would contribute to meet the regional CDR target based on its geophysical, economic, and technical capabilities.

The scenarios indicate that BECCS starts to be deployed at scale and in different countries already in 2020 owning to its lower removal costs compared to other technologies, followed by afforestation, while biochar deployment is very limited across the timescale, contributing with less than 1% to the total CO2 removed by 2100. The role of DACCS is more prominent during the second half of the century.

The results show that the cost-optimal way to meet the Paris Agreement, strongly relies on international cooperation, especially when the availability of biomass resources is restricted (for example by excluding biomass imports to EU from the scenario). When nations act in isolation, not only the deployment of these technologies at scale is more costly, but some of the EU countries are not able to meet their own targets, due to lack of access to CO2 storage or limited biomass and land availability. To overcome this challenge, the study suggests that NETPs should be integrated into an international market for negative emissions trading, in which nations capable of generating CDR surplus, relatively to their individual CDR targets, could provide this as a service to other nations with lower biomass and resource availability. In such market, CDR surplus would generate negative emissions credits (NECs), that could be traded between nations, thus enable meeting the Paris Agreement target in the most cost-efficient manner. However, how, and at which price should NECs be allocated from a nation to another represents an open question.

The study argues that the later a market for negative emissions trading would be implemented, the more expensive delivering the Paris Agreement’s CDR objectives would be. Therefore, immediate action towards the establishment and deployment of a multi-regional, or possibly international, geopolitical and economic framework for NE trading will be key in delivering the Paris Agreement’s CDR objectives, supported by robust governing bodies that enable monitoring, verification and accreditation.

PrevPreviousStakeholder views on NETPs governance
NextNETPs and Bio-Geophysics DatabasesNext
XWe use cookies on our website to give you the most relevant experience by remembering your preferences and repeat visits. By clicking “Accept”, you consent to the use of ALL the cookies. In case of sale of your personal information, you may opt out by using the link Do not sell my personal information. Read MoreRejectAcceptCookie settings
Manage cookie consent