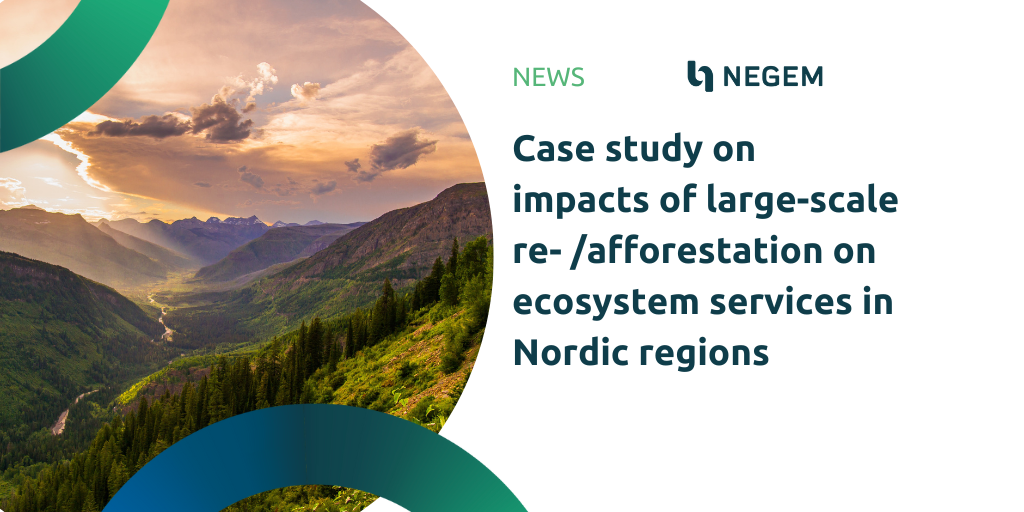 Conservation of forests and reduced deforestation are the best forest based NETPs in the context of the Nordic countries in terms of overall positive impacts. On the other hand, afforestation and reforestation (A/R) show the least potential for climate change mitigation while at the same time having the most negative environmental effects.

Other NETPs with high potential in the Nordic countries are bioenergy with carbon capture and storage (BECCS) due to the developed bioenergy infrastructure, and the restoration of ditched and drained peatlands.

As part of its evaluation of negative emission technologies and practices (NETPs), the NEGEM project carried out a case study on the impacts and performance of forest based NETPs in the Nordic countries of Finland, Norway and Sweden.

This deliverable presents an overview of the plans, policies and set target of Nordics countries’ government regarding the role of the forestry sector in climate change mitigation. Then, a literature review of potential environmental effects of forest based CDR methods is carried out, and finally the NETPs considered are evaluated and discussed.

The developed forestry and bioenergy sector in the Nordic countries creates favorable conditions for BECCS, which could be easily implemented at the already existing emission point sources with very high CDR potential, although the highest CDR potential resides in the restoration of drained peatlands.

However, the solution which was evaluated as the overall best when taking environmental effects into consideration was the conservation of already existing forests.

The option with the most negative effects is A/R. While creating additional forested land can increase the amount of CO2 removed from the atmosphere, this effect might be mitigated by the change in surface albedo from seasonal snow cover. Furthermore, the CDR potential of A/R is quite limited since most areas suited for forests are already used for forestry; new forested areas are also seen as damaging to the touristic and recreational values of other environments, and to biodiversity as well.

The results of this deliverable will be further used in the NEGEM scenarios to be modelled in WP8.

Literature assessment of ocean-based NETPs regarding potentials, impacts and trade-offs

Marine NETPs have significant potential to both capture and store CO2 directly or indirectly from the atmosphere, but their environmental impacts need to be further

After the first International Conference on Negative CO2 emissions in 2018 was a great success for knowledge sharing and collaboration initiatives, the community had to

This document synthesises the discussions of a workshop titled “Consideration of Greenhouse Gas Removal (GGR) into Emissions Trading Systems: Principles and Practice”, held on 25

Meeting the 1.5 °C target may require removing up to 1,000 Gtonne CO2 by 2100 with Negative Emissions Technologies (NETs). We evaluate the impacts of Direct Air

PrevPreviousLiterature assessment of ocean-based NETPs regarding potentials, impacts and trade-offs
XWe use cookies on our website to give you the most relevant experience by remembering your preferences and repeat visits. By clicking “Accept”, you consent to the use of ALL the cookies. In case of sale of your personal information, you may opt out by using the link Do not sell my personal information. Read MoreRejectAcceptCookie settings
Manage cookie consent