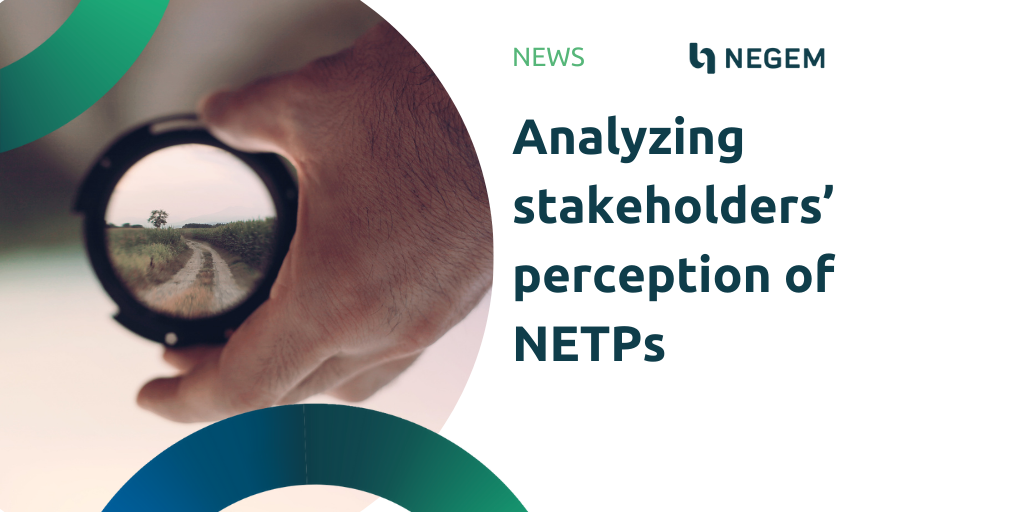 In order to successfully contribute to net-zero, NETPs will need to secure social license to operate (SLO), defined as an “ongoing approval and broad acceptance of society to conduct its activities”, at local, national, and European scales. Previous research has shown that there is currently low public awareness of NETPs, meaning that the public at large, and indeed many key stakeholders, may be still forming opinions of carbon dioxide removal (CDR) as a whole as well as of individual NETPs.

A recent report by the University of Cambridge shows the results of a study carried out as part of NEGEM activities to analyze stakeholder perceptions of NETPs across sector, time, and geographies. To assess the state of policy discourse around CDR in Europe, the study has used text mining and sentiment analysis on roughly 200 documents regarding NETPs from a wide range of actors. This method allowed to identify the polarity of stakeholder opinions on carbon removal strategies as a whole, compared to other related concepts, as well as specific NETPs.

The report points out that documents published by organizations on NETPs are largely concentrated in the past two years compared to the last decade, thus suggesting a recent surge in interest among stakeholders in carbon removal as a whole and in specific approaches.

Positive average sentiment scores were found overall for both Carbon Dioxide Removals in general and the individual NETPs, except for enhanced weathering which presents a net negative score (possibly due to the low number of reports discussing it – indicating lower stakeholder awareness and interest).

Afforestation/reforestation had higher positive sentiments than most NETPs, especially BECCS, which is seen less favorably. However, AR also had the highest and negative values, suggesting that the opinions on this solution are more strongly polarized than others. This could be explained by the fact the afforestation/reforestation was also the most discussed NETP in the analyzed documents. Since this NETP has been discussed as a climate solution for decades, there is probably greater awareness of its associated pros and cons, compared to other NETPs.

The study also found that CDR is perceived more positively than the precursor concept of CCS, but more negative than Net-Zero, despite the concept of net-zero implies the use of removals. This finding illustrates the importance of framing in shaping stakeholder perceptions. Net-zero is often presented as a bold, ambitious target we should aim for, and it is therefore perceived more favorably than the less-discussed concept of carbon dioxide removal, despite the two concepts being two faces of the same coin.

There was considerable geographic and sectoral variation in organizations’ sentiments. Western European and Northern European reports showed the most negative sentiment overall, however, these actors are also the ones discussing NETPs more often in their documents, while other European regions had the fewest documents about NETPs (there were ten times as many documents from Western Europe as Southern Europe).

Understanding sentiments toward carbon removal more broadly, as well as individual approaches, will be especially important in shaping policy at national and EU scales.

Further research will build upon these findings to include more documents and perspectives, and to identify specific linguistic structures being used to discuss NETPs in public discourse. As the number of reports and organizations covering NETPs expands, it may also be possible to identify a temporal evolution in the sentiment score, on top of more accurate predictors. A further assessment of stakeholders perceptions will be also conducted in the coming months, through qualitative interviews and a pan-European survey to better understand how individuals within organizations are shaping their opinions, and to identify which factors they perceive to be important in helping them shape these positions.

PrevPreviousSetting ‘Fair’ Member States Targets
NextStakeholder views on NETPs governanceNext
XWe use cookies on our website to give you the most relevant experience by remembering your preferences and repeat visits. By clicking “Accept”, you consent to the use of ALL the cookies. In case of sale of your personal information, you may opt out by using the link Do not sell my personal information. Read MoreRejectAcceptCookie settings
Manage cookie consent