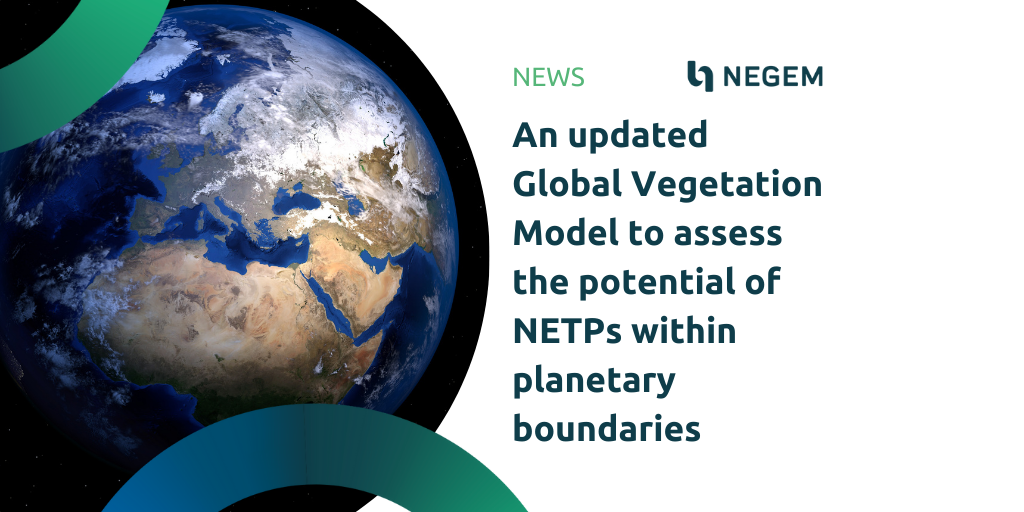 According to the NEGEM multi-disciplinary approach, the NETPs assessment implies to evaluate sustainable potentials as well as environmental impacts, side effects and trade-offs of large-scale NETP deployment.

Before discussing the deployment pathways for NETPs, it is crucial to assess their realistic and sustainable potentials. State-of-the art biogeochemical modelling of the land surface is a precondition for assessment of CDR potential, especially for terrestrial biomass-based NETPs, such as re-/afforestation, bioenergy with carbon capture and storage (BECCS) and pyrolysis with carbon capture and storage (PyCCS). The modelling should include a consistent coupling of all relevant carbon, water, nitrogen and energy fluxes, at a high temporal and spatial resolution, as well as the representation of management options such as irrigation and fertilization. This requires an advanced tool that captures the key environmental functions most relevant to the NETP potential and impact assessment.

The Dynamic Global Vegetation Model LPJmL (Lund-Potsdam-Jena managed Land) is a process-based model that represents the vegetation and simulates climate and land use change impacts on the terrestrial biosphere, agricultural production, and on carbon and water cycles. Also, recent model developments included an improved representation of vegetation phenology and of the nitrogen cycle. This model was upgraded to become highly operational for NEGEM analyses (named LPJmL5-NEGEM).

LPJmL5-NEGEM is an upgraded and integrated version of LPJmL, and provides an advanced modelling tool to evaluate:

LPJmL5-NEGEM integrates features belonging to different versions of the original model. Important LPJmL4 features such as the updated phenology module and an enhanced irrigation module were merged into LPJmL5, which includes the nitrogen cycle.

The improved phenology developed in LPJmL4 is crucial for simulating both NETPs realistic potentials, especially in high latitudes, and climate change impacts on forests and biomass yields for different future climate pathways or climate extremes.

Also the integration of the nitrogen cycle as in LPJmL5 is relevant for the NEGEM analyses, notably for the role of nitrogen on plant productivity, and thus for productivity in future projections under climate change scenarios. For example, it will be possible to calculate impacts of fertilized bioenergy plantations on nitrogen flows, and so contribute to assess NETPs potential within planetary boundaries.

Concerning the representation of vegetation, some relevant bioenergy functional types (BFTs) will be used in the NEGEM analyses to simulate climate sensitive and management-specific yields of different feedstock types for BECCS and PyCCS: for this, the parametrization of BFTs was updated and validated within LPJmL5-NEGEM using a recent extensive observational dataset on bioenergy yields.

This post is based on a report by Constanze Werner, Johanna Braun, Wolfgang Lucht, Dieter Gerten (Potsdam Institute for Climate Impact Research).

For further information on the LPJmL model, visit the dedicated webpage.

PrevPreviousDeveloping a regionalized and expanded tool to model and optimize NETPs at EU level: MONET-EU
NextTransferring data and scenarios between the models used in NEGEMNext
XWe use cookies on our website to give you the most relevant experience by remembering your preferences and repeat visits. By clicking “Accept”, you consent to the use of ALL the cookies. In case of sale of your personal information, you may opt out by using the link Do not sell my personal information. Read MoreRejectAcceptCookie settings
Manage cookie consent