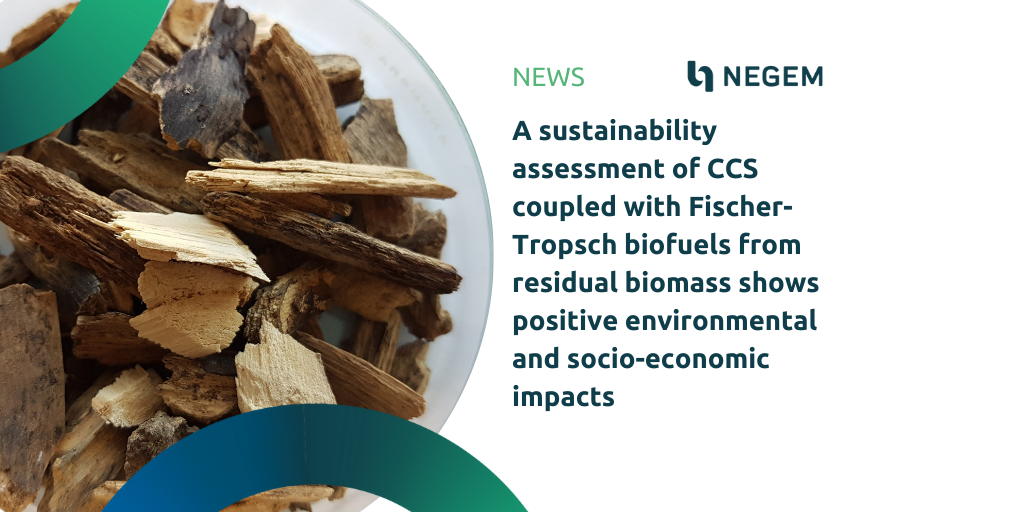 A recent study carried out by VTT and ETH from the NEGEM consortium presents the results of a techno-economic assessment (TEA) and a life cycle assessment (LCA) performed on a hypothetical plant producing biofuel from forest residue biomass through FT combined with CCS and located in northern Europe. As negative emission technologies and practices (NETPs) such as bioenergy production combined with carbon capture and storage (BECCS) will be needed to achieve the 2°C and 1.5°C goal, it is pivotal to evaluate the techno-economic, social and environmental sustainability of these measures.

NEGEM explored the feasibility of a FTL-CCS plant producing biofuels from residual woody biomass, by evaluating it against six key performance indicators (KPIs) including removal efficiency, quantity of avoided CO2 emissions, levelised cost of stored CO2 and monetised environmental impacts. The case considered included six scenarios which differed in the assumed characteristics of the plant, whether located next to a port or away from it (100 km, with CO2 transported to a port via pipeline after capture), whether employing dedicated or shared (with other CO2 sources) infrastructure for the transportation to the offshore storage site, annual CO2 output of the plant (either 208 or 500 kt/a) and fuel production capacity (either 1000 or 2400 bbl/d).

NEGEM’s analysis shows that under the assumptions of this study, the price of FT crude would range between 125 and 147 EUR/MWh depending on the capacity of the plant. These costs are between 2 and 3 times higher than fossil crude, but they could be reduced by 25-34 EUR/MWh with a 30% decrease in capital costs, and by 10-15 EUR/MWh if the plant also produced district heat. Even though CCS would represent an additional cost to produce FT crude (an additional 14-29 EUR/MWh), if the negative emission from the FTL-CCS plant were assigned the EU policy value of 50 EUR per avoided ton of CO2, the monetary gains from CCS would outweight the costs in most considered scenarios, thus making the business case more feasible. The levelized cost of stored CO2 would be 178 EUR per ton with optimal conditions, i.e. having a large capacity plant as close as possible to the port from where the captured CO2 will be shipped to the storage location via shared infrastructure. The same scenario would also have the lowest cost of FT crude production and CCS; this shows the importance that infrastructure and logistics play in the economics of BECCS, as proximity of the production plant to pre-existing transportation means serving multiple CO2 sources greatly reduces costs. Of the 16 mid-point indicators (e.g. land use, water use, eutrophication etc.) considered, 9 showed positive impacts from FTL-CCS, so its effects can be regarded as overall positive. Most of the benefits assessed come from the substitution of fossil fuels and electricity with cleaner FT-derived replacements.

Transport and storage are important cost factors for CCS and they are highly dependent on the transport chain capacities, as well as on the location and the size of the FTL-CCS plant. Creating a shared transport and storage infrastructure could lower the costs and enable CCS also for smaller capacity plants.

Even though at the moment there are no commercial plants producing FT fuels from biomass, the results of this study suggest that should such plants be built, it would be favourable to equip them with CCS provided that negative CO2 emissions can be credited, and that sufficient CO2 transport and storage infrastructure exists. The recognition of negative emission would improve the economics of FTL production and could speed up the commercial adoption of this technology.

PrevPreviousTransferring data and scenarios between the models used in NEGEM
NextBuilding a database for the cost-optimal deployment of a portfolio of NETPsNext
XWe use cookies on our website to give you the most relevant experience by remembering your preferences and repeat visits. By clicking “Accept”, you consent to the use of ALL the cookies. In case of sale of your personal information, you may opt out by using the link Do not sell my personal information. Read MoreRejectAcceptCookie settings
Manage cookie consent