A global review of NETPs scaleup and commercialization mechanisms 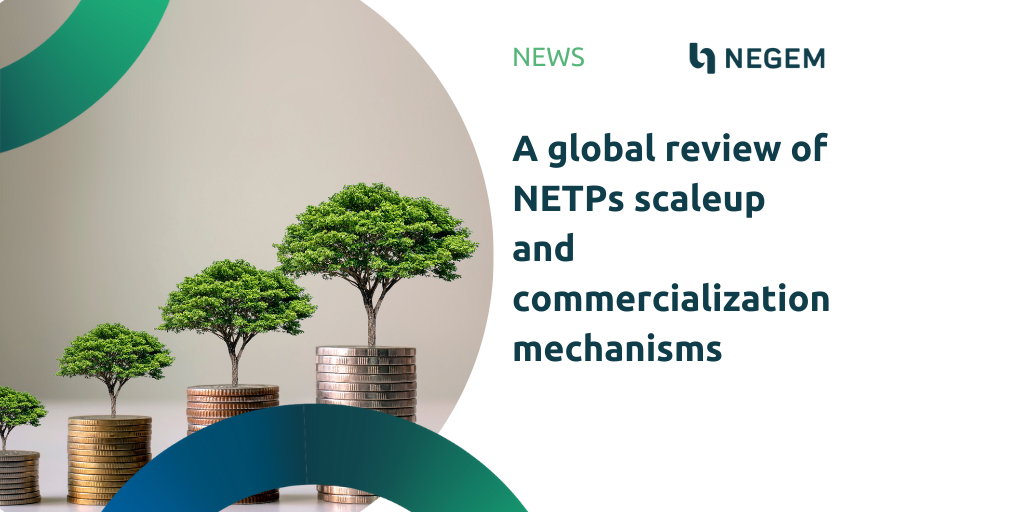 Mechanisms that support NETPs are an important part of scaling up the removal capacity required in the majority of net zero modelling scenarios.

A recent report published by the University of Oxford as part of its activities in NEGEM, provides the first quantitative survey of commercialization mechanisms for NETPs at a global level, cataloguing their current cost and scale, reviewing proposed mechanisms in academic literature and in draft and actual legislation, assessing their relevance for the EU and forecasting the financial resources necessary to sustain them in 2030 and 2050.

The report highlights that in Europe mechanisms to incentivize the scale up of NETPs do not currently exist, and outside of Europe the existing mechanisms generally tend to support established afforestation and soil carbon sequestration methods and do not pay enough to incentivize investment in Direct Air Carbon Capture & Storage (DACCS) and Bio Energy with Carbon Capture and Storage (BECCS).

According to the three scenarios to reach net zero emissions considered in the report, in 2030 mechanisms to scale NETPs could require financial resources of between €4.8 and €6.7 billion annually, which may rise to between €9.8 and €30 billion annually by 2050.

Governments contribute most financial resources in all scenarios in 2030, but the market surpasses them by 2050 due to the EU ETS price exceeding the cost of removals. By 2050 engineered removals make up the vast majority of financial resource requirements across scenarios.

Europe’s ETS is predicted to generate revenues up to €100 billion by 2030 with the inclusion of new sectors and higher prices. In these circumstances, the EU ETS could have the financial resources to support the required level of NETPs in some capacity.

In addition to price signals, NETPs will likely need market-based incentives. Mechanisms from different regions may not match the risk preferences of European investors and capital markets. The study argues that for Europe a carbon Contract for Difference may be a valid mechanism for BECCS and subsidy type payments are more likely for land-based NETPs.

The Commission’s proposal of the CAP 2021-27 budget, including an “economic recovery” envelope, amounts to €352 billion, with an expectation that 40% of the CAP budget will be climate-relevant. The subsidies needed to reach the land sink target estimated in the study equal to below €4 billion per annum. Therefore it is possible that the CAP in combination with the forestry strategy could support land-based NETPs to ensure the agricultural sector reach’s its 2035 net zero target.

PrevPreviousSustainabilty Assessment of Marine NETPs
NextInteractions and trade-offs between nature-based and engineered climate change solutionsNext
XWe use cookies on our website to give you the most relevant experience by remembering your preferences and repeat visits. By clicking “Accept”, you consent to the use of ALL the cookies. In case of sale of your personal information, you may opt out by using the link Do not sell my personal information. Read MoreRejectAcceptCookie settings
Manage cookie consent